Promoting a genuine culture of hospitality and solidarity 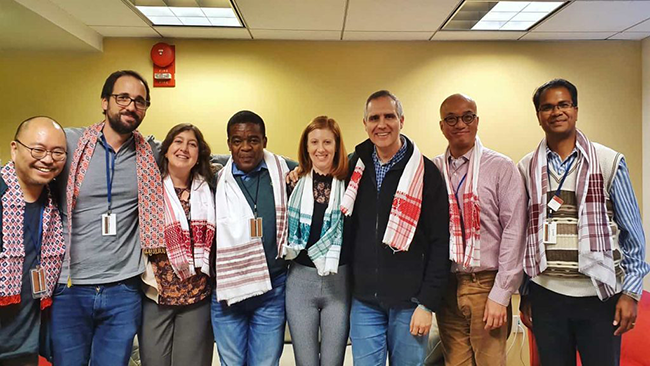 Global Migration Experts Build a “Culture of Hospitality and Solidarity”

February 13, 2020 — This month the Jesuit Conference hosted an annual meeting of migration experts from the Global Ignatian Advocacy Network (GIAN). Delegates discussed the migration realities in their home countries and Conferences, identifying common trends in global migration, such as “the criminalization of migrants and their defenders in several parts of the world and increasingly restrictive public policies that violate the rights of migrants.” Through a joint statement the GIAN delegates called on the global Ignatian community to create a “culture of hospitality and solidarity” with migrants.

“Migrants are human beings like all of us,” said Rampe Hlobo, SJ, the GIAN delegate for Africa and Madagascar. “They carry the human dignity that every one of us carry and that human dignity should be protected.”

Across Conferences, delegates expressed concern for growing xenophobia. Across all the Conferences, delegates found that , violence and hostility against migrants was intrinsically linked to poverty and systemic economic injustice. When government systems fail or welfare services are poorly implemented, vulnerable migrants are dehumanized and scapegoated for these failures by host communities. Hostility rather than hospitality becomes the order of the day.

We asked these migration researchers and advocates about global migration trends and how nations can improve international migration policy.

*This Q&A has been edited for grammar and brevity.

Q: What should a North American audience understand about migration in your regions?

Alberto Ares discusses migration realities in Europe. Slide text: “19,236 dead migrants in the Mediterranean of 34,596 documented deaths at the borders of the world.”

Q: What regional migration policies do you want to improve or change?

Q: How do you balance addressing the immediate needs of migrants and changing the societal conditions that create those needs?

Q: How can communities work to change migration policy?

Alberto Ares, Valeria Mendez, Kim Min, and Rampe Hlobo share stories from their ministries.Q: How does your work give you hope?

Alberto Ares, SJ, is a Jesuit of the Spanish Province and a researcher at the Institute for the Study of Migration at Comillas Pontifical University in Madrid.

Rampe Hlobo, SJ, is the former director of Jesuit Refugee Service in South Africa and now a migration expert with the Jesuit Justice & Ecology Network Africa.

Martin Puthussery, SJ, serves as the coordinator of the Labour & Migration Unit at the Indian Social Institute, and he resides in Bangalore.

Kim Min, SJ, is a Jesuit of the Korean Province, and he coordinates the Migration Network for the Jesuit Conference of Asia Pacific.