History of the Society of Jesus

What We Stand For

From the very beginning, the Society served the Church with outstanding men: Doctors of the Church in Europe as well as missionaries in Asia, India, Africa and the Americas. Men like Robert Bellarmine and Peter Canisius spearheaded the Counter Reformation in Europe, courageous men like Edmund Campion assisted the Catholics in England suffering under the terrible Elizabethan persecutions and missionaries like deNobili Claver, González, deBrito, Brebeuf, and Kino brought the Gospel to the ends of the earth. No other order has more martyrs for the Faith.

Inigo of Loyola who would later become known as St. Ignatius, gathered around him an energetic band of well-educated men who desired nothing more than to help others find God in their lives. It was Ignatius’ original plan that they be roving missionaries such as Francis Xavier, who would preach and administer the sacraments wherever there was the hope of accomplishing the greater good. It soon became clear to Ignatius that colleges offered the greatest possible service to the church, by moral and religious instruction, by making devotional life accessible to the young and by teaching the Gospel message of service to others. From the very beginning these Jesuit schools became such an influential part of Catholic reform that this novel Jesuit enterprise was later called “a rebirth of the infant church”. The genius and innovation Ignatius brought to education came from his Spiritual Exercises whose object is to free a person from predispositions and biases, thus enabling free choices leading to happy, fulfilled lives.

Jesuits were always deeply involved in scholarship, in science and in exploration. By 1750, 30 of the world’s 130 astronomical observatories were run by Jesuit astronomers and 35 lunar craters have been named to honor Jesuit scientists. The so-called “Gregorian” Calendar was the work of the Jesuit Christopher Clavius, the “most influential teacher of the Renaissance”. Another Jesuit, Ferdinand Verbiest, determined the elusive Russo-Chinese border and until recent times no foreign name was as well known in China as the Jesuit Matteo Ricci, “Li-ma-teu”, whose story is told by Jonathan Spence in his 1984 best seller. China has recently erected a monument to the Jesuit scientists of the 17th century – in spite of the fact that since 1948 120 Jesuits languished in Chinese prisons. By the way, no other religious order has spent as many man-years in jail as the Jesuit order.

Five of the eight major rivers of the world were first charted by Jesuit explorers. Two of the statues in Statuary Hall in the Capitol in Washington are Jesuits: Eusebio Kino and Jacques Marquette. A 1978 Brazilian stamp celebrates the Jesuit founding of São Paulo. Spanish Jesuits went to Paraguay in 1607, built settlements which lasted from 1607 to 1767 for the indigenous people and taught them how to govern and defend themselves against the Spanish slave traders. They also taught agriculture, architecture, metallurgy, farming, music, ranching and printing. The Guaraní natives of Paraguay were printing books on art, literature as well as school texts in these settlements before the American revolution. This Utopia was suddenly crushed by the influential slave traders who were able to intimidate the Spanish crown into destroying the settlements. King Charles III expelled the Jesuits in 1767 when Paraguay boasted of 57 settlements serving 113,716 indigenous natives. These Jesuit Settlements were called “a triumph of humanity which seems to expiate the cruelties of the first conquerors” by Voltaire – hardly a friend of the Jesuits. The history of Latin America would have been quite different if this form of settlement had been allowed to develop according to its own momentum, offering democracy a century before North America.

Jesuits were called the schoolmasters of Europe during the 16th, 17th and 18th centuries, not only because of their schools but also for their pre-eminence as scholars scientists and the thousands of textbooks they composed. During their first two centuries the Jesuits were involved in an explosion of intellectual activity, and were engaged in over 740 schools.

The expulsion of Jesuits from France:
Then suddenly these were all lost in 1773. Pope Clement XIV yielding to pressure from the Bourbon courts, fearing the loss of his Papal States, and anticipating that other European countries would follow the example of Henry VIII (who abandoned the Catholic Church and took his whole country with him), issued his brief Dominus ac Redemptor suppressing the Society of Jesus. This religious Society of 23,000 men dedicated to the service of the church was disbanded. The property of the Society’s many schools was either sold or made over into a state controlled system. The Society’s libraries were broken up and the books either burned, sold or snatched up by those who collaborated in the Suppression. As if unsure of himself the Pope promulgated the brief of suppression in an unusual manner which caused perplexing canonical difficulties. So when Catherine, Empress of Russia, rejected the brief outright and forbade its promulgation, 200 Jesuits continued to function in Russia.

That Jesuits take their special vow of obedience to the pope quite seriously is evident from their immediate compliance with distasteful papal edicts. Clement XIV’s Suppression is one example. Another occurred earlier in 1590 when Pope Sixtus V wanted to exclude Jesus from the official name of the Society. Jesuits immediately complied and offered alternate names but Sixtus died unexpectedly before his wish could be carried out. Included among these occasional papal intrusions in the Society’s governance was Pope John Paul II’s appointment of a delegate to govern the Society during Superior General Arrupe’s illness. So edified was he at the Society’s immediate compliance that the pope later lavished extraordinary praise on the Jesuit Order.

The Society was restored 41 years after the Suppression in 1814 by Pope Pius VII. Although many of the men had died by then, the memory of their educational triumphs had not, and the new Society was flooded with requests to take over new colleges: in France alone, for instance, 86 schools were offered to the Jesuits. Since 1814 the Society has experienced amazing growth and has since then surpassed the apostolic breadth of the early Society in its educational, intellectual, pastoral and missionary endeavors.

As for education, today there is an extensive worldwide network of Jesuit schools educating one and a half million students. There are 90 Jesuit colleges in 27 countries. There are also 430 Jesuit high schools in 55 countries. In these schools the Ignatian system of values has attracted exceptionally competent faculty as well as highly qualified students. They form a Jesuit network, not that they are administered in the same way, but that they pursue the same goals and their success is evident in their graduates, men and women of vast and varied talent.

As for education, today there is an extensive worldwide network of Jesuit schools educating one and a half million students. 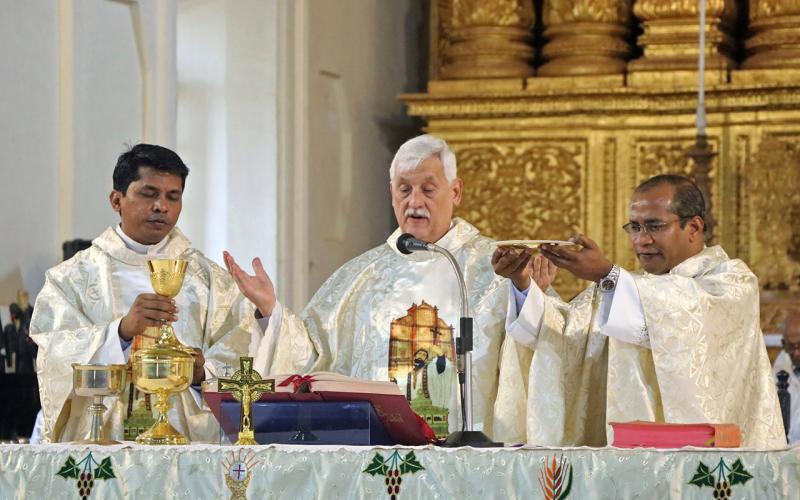 There are 90 Jesuit colleges in 27 countries. There are also 430 Jesuit high schools in 55 countries. In these schools the Ignatian system of values has attracted exceptionally competent faculty as well as highly qualified students. They form a Jesuit network, not that they are administered in the same way, but that they pursue the same goals and their success is evident in their graduates, men and women of vast and varied talent.

Two outstanding Jesuits of the last century were Teilhard de Chardin and Gerard Manley Hopkins. Pierre Teilhard de Chardin, S. J. (1881 – 1955) was a Jesuit paleontologist who attempted to interpret the findings of modern science in the light of the Christian message. People read in Teilhard a message of hope and optimism and his work was perhaps even more influential outside the Catholic Church than within it. Gerard Manley Hopkins, S.J. (1844 -1889) is a major figure in English literature. His innovations in meter and rhythm, his abnormally sensitive use of language and the depth and passion of his religious convictions made an immediate impact on the young poets of the 1920s.