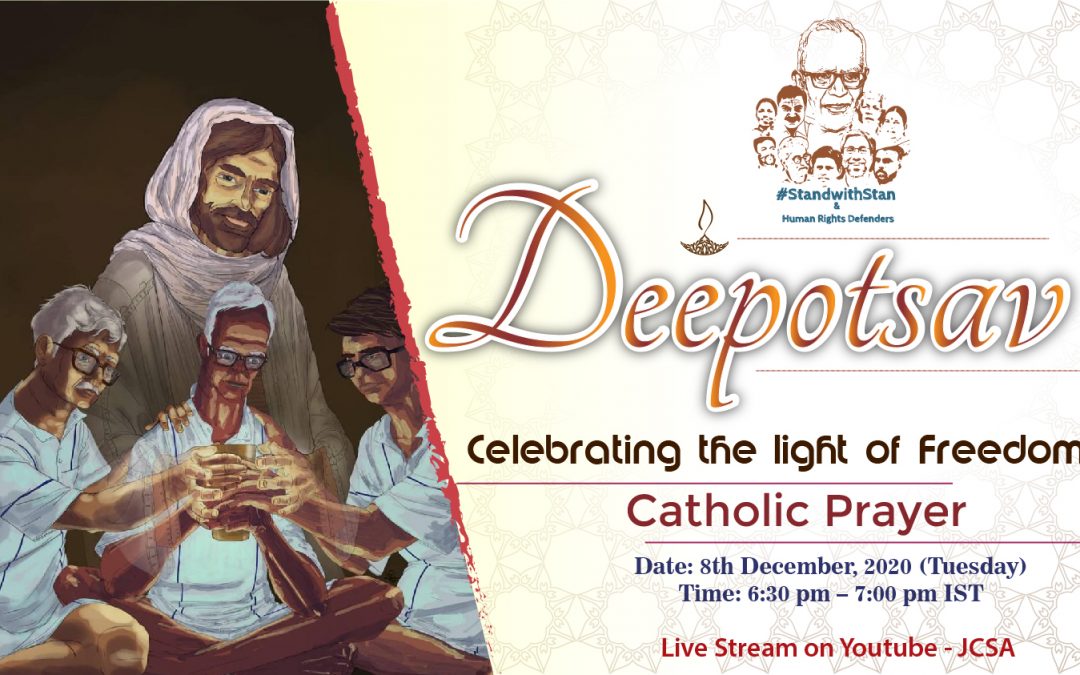 Celebrating the Light of Freedom

Following the Deepotsav – Inter-Religious Prayer, Jesuit Conference of India/South Asia on the 8 th December 2020 conducted a Catholic Prayer on the Feast of the Immaculate Conception. The online prayer was broadcasted live and nearly 600 participants from across the globe had joined the Catholic prayer.

The opening prayer was done by Fr. Nitin, SJ. In the tribal culture, everything in creation invites us for celebration. The Supreme being is the spirit that protects us from evil forces and leads the people from darkness to light. Then there was a time of reflection in which a devotional song was played “Pyaar ke raho mai, Yeshu ke piche chale hum”.

Fr. Cedric Prakash, SJ, Human Rights Activities, Gujarat Provinces, gave a message on Concept of Justice. The rampant justices that take place in our society all the time everywhere. We must respond to the growing injustice every day. Along with Fr. Stan there are 15 others human rights defenders who have been in jail till date for fighting against the injustice towards the Dalits. He says, that we need to respond to the injustices happening around, we need to respond to the cry of the poor, as disciples of Jesus.

For 100s of years the tribal communities, especially in the resource rich, have been exploited and marginalized, by the so called the mainstream society. The natural resources have been looted and the people have been marginalized. They have been left to fend for themselves. The struggle to save the Jal, Jungle and zameen still continues despite the apathy from the political community and the larger society.

A question was put for reflection, “What is my response in the face of injustice?” There was a devotional song sung by Mr. Akhil Pious, Lead Vocalist, Acts of the Apostles.

Human Rights Defenders like Fr. Stan Swamy, SJ, Sudha Bharadwaj, Arun Fereira, Varavara Rao, Vernon Gonsalves, Anand Teltumde, Gautam Navlakha and others stand for the tribal communities and stand against the evil forces that tries to destroy the tribal land and culture. Mr. Damodar Co-ordinator, Vistapan Virodhi Janvikas Andolan People from the tribal community shared his views on the ongoing struggle that is going on for the Jal Jungle, Zameen and the source of livelihood. Aloka Kujur, Member, Adivasi Adhikar Manch, said, Fr. Stan Swamy, SJ used to question the violation of the rights of the people by the State. Mr. Siraj, Social Activist said, although Fr. Stan was quite aged and suffered from Parkinsons disease he used to go dedicatedly go for rally and protest which predicted this commitment. Mr. Prabha Lakra added, that she is able to speak because of Fr. Stan Swamy as he has been an inspiration to her. Mr. Xavier Das, Social Activist, said, Fr. Stan had made a statement with his body. He had the courage to do stand for the poor. Stand sets up an example to stand up for the marginalized and be ready to pay the price. Fr. Nitin, SJ did the closing prayer.

The recording of the Catholic Prayer is available on the link given:
https://www.youtube.com/watch?v=LKtUfdv_myw