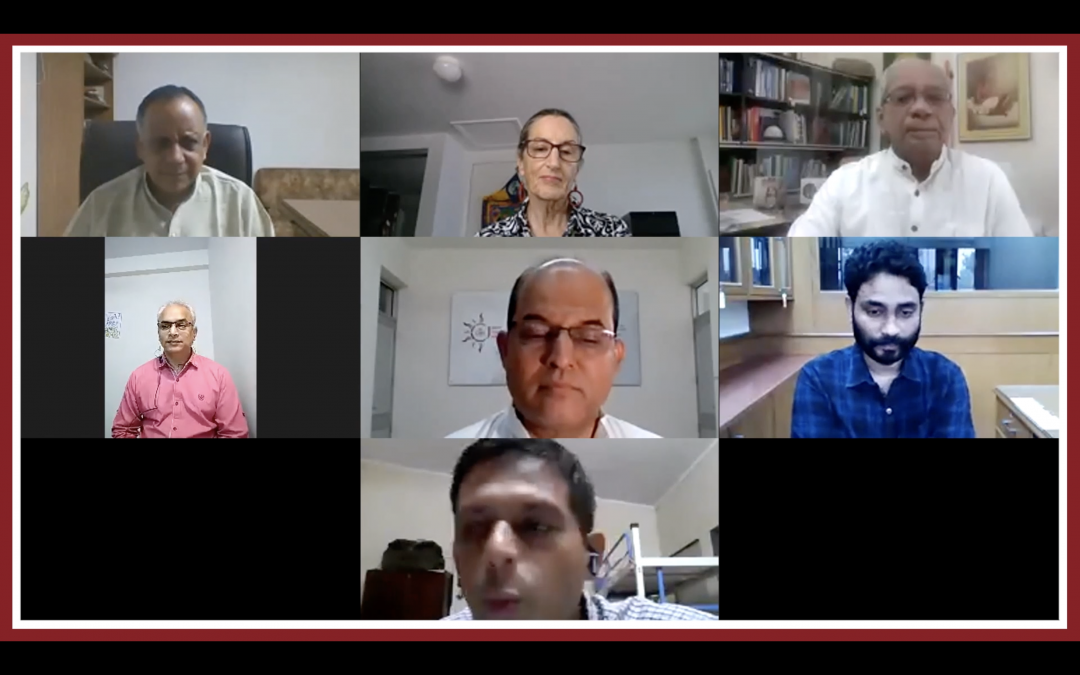 Eminent panelists reflected on the theme “Suffering Humanity: Laudato Si, Fratelli tutti and Our Response” at the webinar “A Renewed Call to Ecological Conversion in the COVID Pandemic Era” on 29 May 2021 from 6 pm to 7:30 pm. Speaking on current situation, both social and ecological, in the specific context of COVID-19 and the need for hope, Dr Jerome Stanislaus D’Souza, SJ, President of the Jesuit Conference of South Asia (JCSA), shared about the encyclicals Laudato Si and Fratelli tutti and the message these encyclicals convey, i.e., care for our mother earth and love one another.

Dr Orla Hazra, associated with Tarumitra in India and Times of India Foundation, spoke about the Faith and Creation, Laudato Si, Fratelli Tutti, Jesuit Pedagogy and some of the pioneer works that she has been part of to take forward the message of care for our common home and love one another. She emphasised that the social and environmental issues are not two separate, but intrinsically connected to one another. Dr Hazra stressed the need for a shift from the human-focused, dualist in a mechanical state universe or empire to an integral emerging democracy where human is centred in a Cosmos genesis.

Speaking from a human rights perspective, Fr Cedric Prakash SJ, a well-known human rights, reconciliation and peace activist from Gujarat Province, discussed the fundamental conceptions of Laudato Si and Fratelli tutti, which are the second and third encyclicals of Pope Francis. He referred to several quotes from both the encyclicals, while highlighting the damages done to the mother earth/environment in the name of development and its impact on humanity and on the nature and importantly our future. Fr Prakash stressed on the need to internalise the encyclicals Laudato Si and Fratelli tutti as Catholics, share the message of these encyclicals with other followers of Christ and concerned fellow citizens to collaborate, and be visible and vocal in supporting for causes related to environment and social justice.

Dr Lancy D’Cruz SJ, Coordinator, Gujarat Jesuits Ecological Mission (GJEM) and Principal of St. Xavier’s Autonomous College, Ahmedabad, shared that while the central message of Laudato Si is that everything in this world is interconnected, Fratelli tutti’s focus is on caring for our fellow citizens who struggle to make a living in this world. Discussing the various socio-ecological projects that the GJEM has been engaged in, Dr. Lancy said the sources of these inspirations are Laudato Si and
Fratelli tutti.

The programme begun with the prayer by Dr Siji Chacko SJ, Director, JCI-CDO. The discussions were moderated by Dr Luke Mendes SJ, a renowned scholar and Jesuit known for his works in the field of Ecology, especially on Biodiversity, Coastal and Marine conservation. Bro. Joshua from the Xavier Institute of Management (XIM), Mumbai, facilitated the webinar. The webinar was organised by the Ecojesuit Network of JCSA in collaboration with Digital Jesuits to mark the Laudato Si Week 2021 observed across the world to observe the 6th Anniversary of Laudato Si and to celebrate the great progress made by the whole Church in its journey toward Ecological Conversion. More than 500 participants from India, South Asia and other parts of the world participated in this programme.