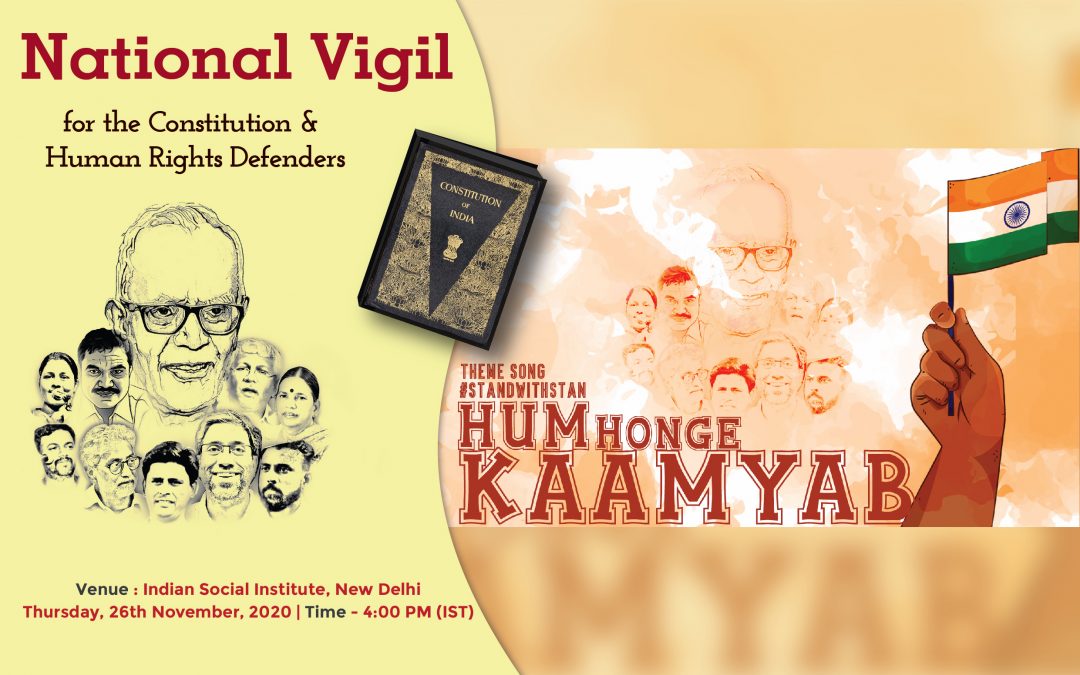 On 26th November the National Constitution Day, was observed as the National Vigil for the Constitution and Human Rights Defenders by Civil Society Organizations across India. In Delhi, the vigil was held at two places, Indian Social Institute and Sacred Heart Cathedral. The Jesuit Conference of South Asia assisted the vigil by live broadcasting the program worldwide.

More than 300 people had joined the vigil and the program included, lightning of the lamp, welcoming the audience, singing devotional songs and watching videos of Fr. Stan Swamy, recitation of the Preamble with candles. A theme song was launched with #StandwithStan “Hum Honge Kamyab” which was prepared by a group called Digital Jesuits.

The vigil was held based on the arrest of Fr. Stan Swamy, SJ who is an 84-year-old Catholic Priest and Human Rights Activist and is at Taloja Central Jail in Mumbai since Oct 9. He is accused of having links with Maoist people.

The chief guest Sanjay Hegde, a senior lawyer of the Supreme Court said, “As responsible citizens of this country, we are committed to safeguarding the constitution. We should take inspiration from people like Father Stan and other rights activists who are behind bars and are working to uplift the poor, Dalits, tribals and downtrodden,”

“The path is not easy under such circumstances but we are the soldiers of the constitution and we are bound by the constitution. It gives us liberty, a power that gives us strength to speak freely against injustice.”

Tehmina Arora, director of the Alliance Defending Freedom, said: “We all speak about the good days but are we really enjoying it in our society. Democracy is stressed now but people like Father Stan are showing how to uphold it. This day reminds us about liberty, unity and freedom of expression; hence we should promote an inclusive India where all are equal in front of the law.”

Father Paul D’Souza, head of the department of Dalit studies at ISI, highlighted the importance of spreading the values of the constitution as it had been framed by all sections of society including Father Jerome D’Souza, who founded the institute in 1951.

He lamented that the vision of the founding fathers of the nation articulated in the Preamble of the Constitution remains an unfulfilled dream for millions of citizens.

He said, “in particular, those who have worked hard for decades to ensure that the constitutional rights of citizens become a lived reality are branded as anti-nationals and are languishing in jails as they have been charged with terror cases,”.

The program concluded by having a Candle Light March (singing “We Shall Overcome”) by the audience.