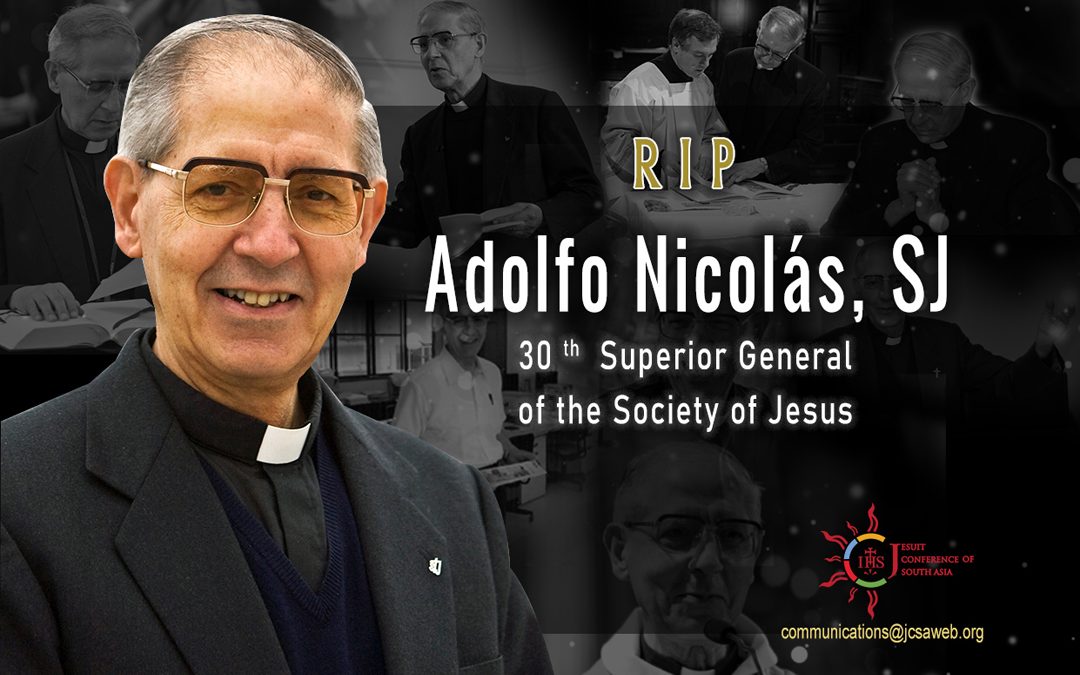 Father Adolfo Nicolás was born on April 29, 1936 in Palencia, Spain. His parents were Adolfo Nicolás Rico and ModestaPachónThe political turpitudes of that time in Spain forced his family to leave their region of origin and to move often. Adolfo spent a large part of his childhood in Barcelona. After thinking about a career in education among as a member of a congregation of Brothers, he was put in contact with the Jesuits by his brother and he attended a Jesuit school in Madrid.

He entered the novitiate in September 1953 in Aranjuez. During his philosophy, he responded to a call from the then General, Father Jansens, who invited Jesuits to volunteer for missions abroad. This is the origin of his vocation as a missionary in Japan.

He graduated in philosophy in Alcalá and Madrid, then went to Japan to learn the language and do his regency. He continued his theological studies in Tokyo where he was ordained a priest on March 17, 1967. He then completed a Master’s degree in Sacred Theology at the Gregorian University (Rome), and was Professor of Systematic Theology at Sophia University in Tokyo, Japan.

In 1978 and until 1984, he was appointed Director of the East Asian Pastoral Institute (EAPI) in Manila, Philippines. After years of service there, he returned to Japan and was rector of the scholasticate in Tokyo from 1991 to 1993.

It was then that he was chosen to be the Provincial of Japan, a position he held until 1999. In 1995, he participated in the 34th General Congregation; at the very beginning of the gathering, he was elected Secretary of the Congregation. A little later, from 2004 to 2007, he was chosen as moderator of the Jesuit Conference of East Asia and Oceania, a position he held at the time when, during the 35th General Congregation of the Society of Jesus, he was elected Superior General on January 19, 2008.

Considering that his health no longer allowed him to carry out his mission as he should have, he convened the 36th General Congregation during which he offered his resignation, according to the rules of the Society of Jesus, on October 3, 2016. After having accepted it, the Congregation elected its successor, the current General, Fr. Arturo Sosa.