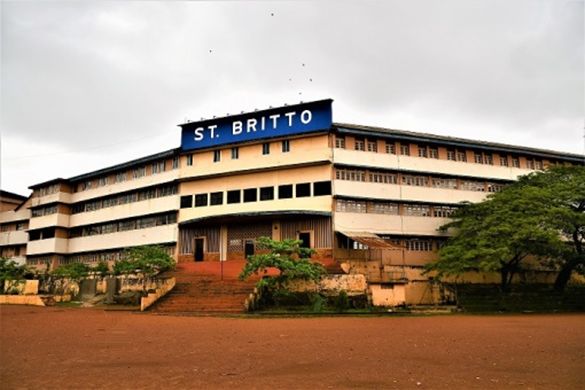 In a bid to curb pollution and meet the daily energy needs St. Britto High School, Mapusa, Goa has installed one of the biggest and first of its kind grid connected rooftop solar power plant in Bardez Goa.

The installed solar power plant will generate 35 KW of energy that will be used to meet daily power requirements of primary and secondary schools beside the residential block. The on-grid rooftop solar power plant on normal sunny days can generate around 100-125 unites of green energy per day. The school will use around 60-to 70 units of the power generated from the power plant, while the surplus power will be sold to the Descom.

The solar project was inaugurated by the minister and MLA of Calangute -Michael Lobo and blessed by Roland Coelho, SJ – the Provincial of the Goa Jesuit Province. A short programme was organized in the school hall, which was attended by distinguished guests, officials from the Electricity department, PTA members, staff, students and benefactors.

The programme began with an opening song “I have a dream” and followed by a prayer. The Headmaster addressed the gathering and thanked the MLA Michael Lobo, the Provincial, members of various departments, benefactors, ex students and parents for their support and rendering financial help to complete the solar project.

“We came up with this idea of installing solar power plant about a few months ago and this was based on previous experience of having small off grid power plant that powered all our computers in computer lab including fans , lights and projector. This has worked really well over the last year, after seeing the response of the students to the power from the sun has propelled to move on to bigger project that can normally take care of the power requirement of the school,” said Br. Nigel.

He added “The idea behind was to create a model that would showcase three basic ideas, i.e. to make a model that is cost effective, viable for a place like this and can be replicated to other areas. Secondly it was also to take significant step toward reducing carbon footprint.”

The School will soon ink PPA for five years with the Discom to sell the extra power generated from the rooftop solar power plant. The cost for the installation of the power plant has been borne by some ex-student and school management.

“The biggest challenge that we faced with the installation of the solar power plant was the procurement of different components needed for the project. Since, most of the components are not available in place like Goa and had to be source from different states, secondly installation of solar is completely a new idea and has not taken off properly in Goa. Thus, to get specialized people or work force for the installation of the project was also challenging, because this involved lot of specialized and skilled people such as fabricators, electricians and engineers,” said Br. Nigel.

St Britto High School founded in 1946 is one of the oldest and renowned school in Goa , Mapusa . It is under the supervision of the Jesuits in India and has been a helping hand to raise and teach, generations of exemplary young men for over decades. The school has done an impeccable work in the educational and ecological segment. Taking a step forward to curb pollution and meet the daily energy needs, the school has installed one of the biggest and first of its kind grid connected rooftop solar power plant in Bardez Goa.