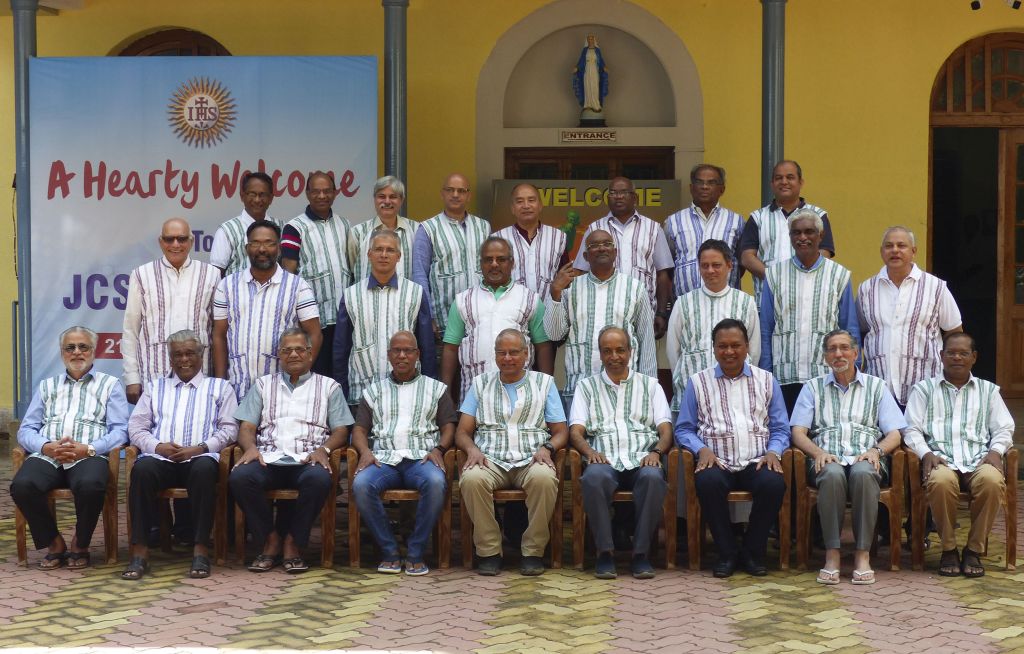 JCSA (Jesuit Conference of South Asia) meeting held at Manresa House, Ranchi 21-28 Oct, 2019 provided a platform for the Major Superiors of the Conference to acquaint themselves with some of the burning issues before the conference. The six days were spent in deliberating, discerning and making decision on these issues.

The cool temperate climate of Ranchi hovering between 21-28 degrees Celsius, with intermittent rains provided a comfortable atmosphere for a get away from the busy schedules Major Superiors have, to engage in reading, reflection, prayer and discernment.

The issues before them were:

1. Bringing closure to the two and a half year process of REGAE II that began after JCSA Jabalpur Feb 2017. There were decisions pertaining to the Conference on the Role of JCSA and The President, JCSA vis a vis Apostolic Planning. Decisions on furthering and enhancing the work of the Zones, making them nodal agencies for collaboration, networking, sharing, and change within the conference. They agreed to initiate discussion on redrawing boundaries of their zones. Finally at the Province level, the province secretariats would mirror, in principle, the new agreed upon, rationalized and reduced structure of the secretariats at the conference level. The important step they agreed on was to undertake an audit of the apostolic sectors of the province, before finalizing the Province Apostolic Plans aligned to the UAPs. The Major Superiors also recognized and accepted their role of being co-responsible for the Conference and its works, committing themselves thereby to greater sharing of finances and personnel for inter-provincial, inter-zonal, and conference needs.

2. Promotion of a Consistent Culture of Protection (PCCP), is a work in progress, initiated by Fr General with the help of two resource persons, Fr John Guiney SJ and Ms. Michelle Hennessey. In their interaction with us and later in four zonal workshops (Ranchi, Delhi, Pune & Bengaluru), they underscored the need to proactively put in place structures for prevention as well as redressal of cases of abuse. The approach they advocated was in line with the Gospel, viz., inculcating “a spirituality of care”, so as to heal wounds of the past. The Major Superiors have their homework cut out for them.

3. Standing in solidarity with the Jesuits and the people of Jharkhand. As the JCSA meeting was held in Jharkhand, it was only appropriate that the situation of the Tribals and Scheduled Castes would feature in their deliberation. Half a day was allotted to listening to two speakers giving us their perspectives on Jharkhand, its socio-economic-political situation and the response of the Church and the Society of Jesus. The Central Zone Major Superiors also chipped in to narrate the happenings in their areas. Taking off from these impassioned inputs, the JCSA came up with a statement, expressing its solidarity with the people, extending their support for those who are engaged in the struggle for justice, peace and an egalitarian society, especially empathizing with those who have been falsely accused.

4. Open air prayer at Fr AT Thomas’ memorial at Punya Bhumi (Hazaribagh).  Participating in the Common Prayer of the oppressed people at the site of the martyrdom of Fr A.T. Thomas SJ (HAZ), was one of the highlights of the JCSA meeting. On the 26th Oct, three days after the 22nd anniversary of his martyrdom, we gathered along with a sizeable crowd of villages, young and old, to pray through the intercession of Fr AT, for courage to continue the struggle against oppression of the tribals and the Scheduled Caste peoples in that area.

The forest was transformed from a deserted, godforsaken spot into a grace filled open air shrine. The lilting tunes of the adivasi bhajans, composed and sung with gusto by the people, were a living testimony of the memory they cherished of a youthful champion of their rights. This memory that has been kept alive and celebrated year after year, was the occasion for us to witness the longing of the people for liberation. For the members of the JCSA it was a touching moment of great significance: simple, direct and potent. It invited us to recommit ourselves to the cause of the poor and marginalized, the silenced voices of the voiceless, calling to be heard.

JCSA is grateful to Fr Marianus Kujur the Provincial of Ranchi, and to all those who extended us a welcome, and made our stay a fruitful one.